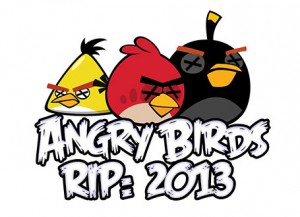 I woke up this morning to find an update to Angry Birds “classic” in the App Store on my iPhone.  The Short Fuse episode has 30 new levels, “Step into the laboratory with wacky scientists and crazy potions.”  The moment of excitement about a new episode and new levels was short lived though.   For a second, I had that fleeting moment of joy about the update, like I did in 2011 and before. Things are different now though.  Updates are different now.  The game is different now.  Unfortunately for Rovio, I don’t like it – and I’m not the only one.  I don’t want to step into the laboratory.  I don’t want to mix potions.  I don’t want to use Power-Ups.  I want to pick up the game and play a level while waiting in line or on a conference call at work, with my door shut.  I just want to fling birds, break stuff and pop pigs.  But I can’t anymore and that’s why Angry Birds sucks now.

In the summer of 2011, Rovio turned down a reported $2.25 billion acquisition bid from Zynga.  The bad part for both parties is, this is what killed Angry Birds.  Zynga was rebuffed and went back to solving other issues, like how to get people to keep playing Words With Friends and Draw Something and Rovio went on releasing more Angry Birds related stuff.  Something was different though.  From that moment on, Rovio, even if self-imposed, was instantly forced into the position of trying to prove they had not made a major mistake and that the Angry Birds franchise was actually worth as much as they thought it was. 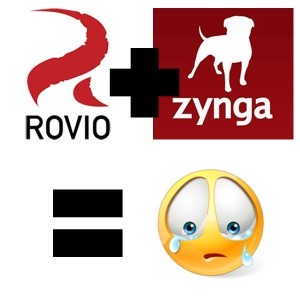 This is when things started to go downhill for loyal Angry Birds fans.  The game was no longer about the game.  Rovio couldn’t sit back and be happy with the money they were previously making.  They had to step up their game and start making a ton of cash and profits to prove they weren’t the ding dongs that every blog was claiming they were.  Even though Rovio was reportedly serving more mobile ad views than Google’s ad network at the time, it wasn’t enough.  They had to introduce a way to force users into spending money via in-app purchase.  Angry Birds fans, meet Power-Ups.

Power-ups were actually added slowly.  First to the Facebook version, and later to the mobile versions.  They were introduced into single episodes before they were rolled out across full apps.  In the beginning they were just there, but then they started to forced upon you at the start of every level and some levels became nearly impossible to pass without them.  So what’s the problem with Power-Ups?  The problem is, you only get so many before you run out.

Did I say you only get so many?  What I meant to say was, you only get so many for free.  If you want more, you can have as many as you want.  You just have to buy them – with your cold, hard cash.  This fundamental change in the way the game works had other effects beyond how we play the game as an individual.  It also had effects on how we play with friends.  Before, you could post a score on a social network or send a screenshot and challenge friends to see who could get the top score. 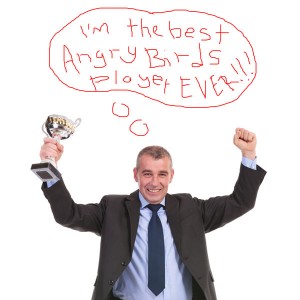 What’s the point of winning?  What’s the point of playing, if it’s just about spending money to win, or get the best score or even pass the level?  Um, that’s dumb.  No thanks.  I’ll pass.  I used to spend hours replaying the same level to get the best score – to post a video on YouTube or a screenshot on a website or to walk into a co-work’s office and say, “In your face, sucka!”.  Why?  Because you could actually get the best score, possibly a better score than anyone in the entire world.  Because everyone played the same level the same way.  But that’s all gone.

The Angry Birds communities are still there, but they’re not the same either.  It’s not a race anymore to solve the puzzle, because you can just pay to solve it and pay more to solve it even better – quicker, easier and with a higher score.  Even the die-hard fans on sites like Angry Birds Nest don’t like the way Angry Birds works now.  You can read it in the comments on the sites.  Sure they still play the game, but they all play with no Power-Ups and wish you could turn off all aspects of them  in the game options.  In other communities, there is even more proof that the game is on its last leg.  Angry Birds Cheats was one of the top fan-based walkthrough sites.  They always had videos up before anyone.  They haven’t updated their site in months.

It’s hurts my heart to say it, but Angry Birds sucks and it’s dead to me.  I wasn’t sure it could get worse than it did in 2012, when Angry Birds Star Wars was released.  I love Star Wars.  I loved Angry Birds, but together it’s just a money-grab.  How many more tie-ins are we going to see?  How many more ads with Angry Birds eating pistachios?  How many more things can they stick the characters on?  Only Rovio knows.  How about instead of answering that question, Rovio, you just get back to the basics and make a new “old” version of Angry Birds that’s fun to play and not just a vehicle for making more money.