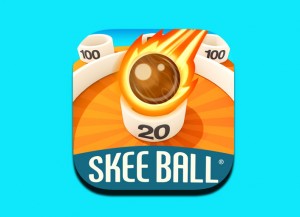 I was browsing the most popular free apps chart in the iOS App Store and noticed that Skee Ball Arcade was #1. I didn’t expect to see an old 1980s classic at the top of the chart and checked out, mostly for the nostalgia. In the past, some of the other skee ball apps I’ve perused had crummy graphics and were boring to play.

Big Cave/Scopely have created the old classic with lots of new twists. The developers have managed to incorporate badges, social sharing, random opponents and interesting tournaments to keep us all entertained. Anyone can play the basic skee ball version, but they’ve taken the concept a bit further and changed up the hole placements, point values and created themes (ie. think bingo rooms).

There aren’t cheat or tutorial sites to help you magically get the high score for this game. This is pure skill, all based on your finger swiping skills. The current levels I am playing give me 10 balls to throw. When you challenge random opponents, you engage in a multi-round contest and the highest cumulative point totals wins the matchup.