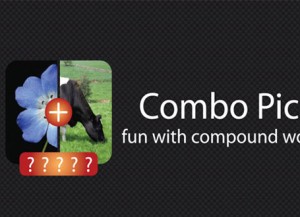 A trend we tend to see both at the Apple Store and the Android Marketplace is that one forward-thinking developer creates a fantastic mobile app, then several other variations are developed and rolled out within weeks of the initial launch.

Once in a blue moon, a developer gets the bright idea to take an idea and tweak it, creating an entire new type of game. Such is the case with Combo Pic. The premise for this game is very reminiscent of some of the skits on Sesame Street.

Each level consists of two pictures. Each picture is giving you a visual depiction of a separate word. Your objective is to guess the word being displayed in each picture. From there, you combine the two words to form a longer word.

The help site that I like to use for this game is Combo Pic Answers. There’s several other ones available, but I like the layout and the convenience of finding the answers.