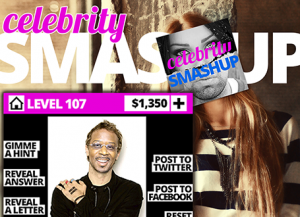 I’ll be honest . . . . I don’t pay much attention to reality television or the celebrity gossip news items that seem to dominate the internet these days. It’s fine if others enjoy the fodder, but I just don’t find it interesting.

Based on the interesting graphics, I decided to give Celebrity Smashup a shot, even if it’s just for a few weeks. This game is beyond freaky because the designers have taken more than one celebrity and mashed up their profile with another celebrity.

Some of these images seem so familiar, but they’ve managed to match up the images to make it a completely new person. This just goes to show how amazing Photoshop can be.

Analyzing the basic features of the person featured is the trick. It could be a unique tattoo, hair style or type of eyeglasses. The fun part to each clue is that they also mashed up the 2 celebrity names.

It’s like that scene from “High Fidelity” where Jack Black’s character says that there new band name is “Kathleen Turner Overdrive”. Not only are the images mashed up for each level, but so is the clue. The combinations are funny and definitely worth a download.

Celebrity Smashup is available for iOS and Android devices and even desktop on Facebook. To play, choose your platform: