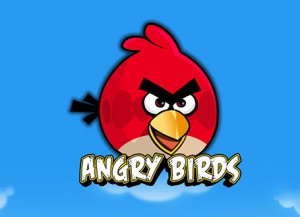 At this point, anyone who plays video games or has a smartphone, should have at least heard about Angry Birds. Rovio released this game several years ago and it just seems to keep on rolling and staying relevant. Angry Birds has several different franchises under its umbrella, which we’ll cover separately in future postings.

The concept of the game is that you have a giant slingshot and you have to fling the birds at a group of pigs that are in random places. The pigs are your enemy and you must crush them with several different types of birds.

The yellow bird is your traditional bird that just moves at the normal rate of speed. Nothing fancy about him. The light blue bird will separate into 3 smaller birds and is perfect for busting through blocks of ice or tight crevaces. The white bird has the ability to drop a giant egg bomb or is great for just smashing into things by itself. The black bird is a bomb that will detonate and is a solid option for busting up stone walls. The orange bird is hysterical because you can drop it into a valley or low-lying area, then tap him and he blows up like a giant puffer fish, smashing everything around him. The pink bird is a new addition and traps surrounding objects in bubbles.

The game uses a star system, based on your point total for that stage. It’s important to land 3 stars on every stage because that will unlock bonus levels. Once most people start playing the game, it only takes a few stages before they are hooked.  For those of us who have difficulty, there are several sites devoted to showing you how to defeat every level. Angry Birds Cheats and Angry Birds Nest are the two most popular sites for walkthrough tutorials and tips on how to beat the levels.

Which version of Angry Birds is your favorite? Do you still play the popular game? Leave a comment below and have your say!