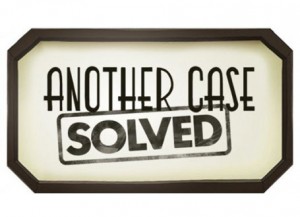 The reason that Chillingo are one of my favorite mobile app developers is because they aren’t formulaic. There are several other developers that will take the time to develop a gaming concept from scratch and then release six or more variations on the same concept. For me, this is a bit derivative.

I understand that releasing these apps takes time and cost money. I also have no problem with app firms doing whatever they feel is necessary to further the initial brand. The maximum enjoyment I get from the app community are when developers take risks.

Case in point would be how I stumbled across Chillingo, in the first place. My first introduction to their games was a free app, called Puzzle Craft. The gist of that game was to take various finger swipes to connect three or more of the same item, in order to attain gold and buy buildings.

Initially not knowing that Another Case Solved would be a Chillingo title, I downloaded the game and immediately noticed their logo. My first thought was that it might be, yet another Puzzle Craft. Needless to say, I was sorely mistaken. 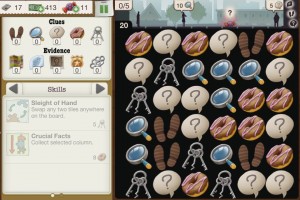 Another Case Solved is a complex game that is broken down into several phases. We’ve broken down each section to give you an idea of how the game is played.

* Evidence Gathering - This is a Connect 3 or more type of finger swiping exercise. If you connect 5 or more, it will cause a different type of clue to drop. As you take turns swiping to get 3 or more, there are benchmarks that you must hit, in order to advance to the next phase.

Successful completion of this phase will take to one of the other phases. Every assignment is different, but the Evidence Gathering (pictured right) phase has been the most consistent throughout each assignment. 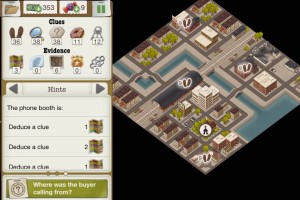 * Neighborhood Surveillance - This portion of the game will give you a map that has key hot spots on it. You are trying to find the correct dwelling, which is the crime scene. (Neighborhood map is pictured left)

The evidence you gathered in the first portion can be used to find coffee shops, factories, grocery stores and other landmarks that can be useful to help you narrow down the correct place. Once you’ve found the right spot, you will then move onto the Crime Scene phase.

* Crime Scene - This is a building format and you search room by room. The meter will tell you how close you are getting to finding the object in the case assignment. You only have a specific number of seconds that you can waste to find the missing item. Every room you search will reduce time off of the clock.

* Suspect Lineup - Features a gathering of potential culprits. The evidence you gathered in the Evidence Phase is used to deduce who it could be.

Some of the basic questions you can have answered are : Man or Woman? Short or Tall? Bald or Curly? will cost you some evidence, but will help you weed out some of the people in the lineup.

As you continue to make your way through this game, you begin to realize the enormity of time and money that went into making this game. This isn’t going to appeal to everyone, but if you are a fan of sleuthing or analytic reasoning types of apps, this game will be right up your alley.

ANOTHER CASE SOLVED (For iPhone)

ANOTHER CASE SOLVED (For iPad)

ANOTHER CASE SOLVED (For Android)