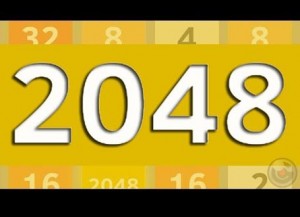 Every once in awhile, a mobile app or gaming concept will come along that blows you away in its addictiveness. The things that inspire me aren’t what inspire most people. Some of the things that have amazed me recently are the simplicity and classic user interface designs, straightforward gaming concepts and crisp graphics being offered.

Last year the game that blew me away was Letterpress. This year, the first app to cause that jaw-dropping moment is 2048. The game has a strange name, but once you start playing, you will immediately understand why it’s called a number.

The concept of the game is easy. You have a 4 x 4 playing board. Each space can hold one block. Each block starts of with the number 2 or 4. Your goal is to matchup similar numbered blocks, in pairs of two. You achieve this by swiping your finger in one of the four directions (up-down-left-right) to move the blocks. If two blocks have the same number, they will combine to form the higher number.

For example, if two #2 blocks merge, they become #4. It’s an educational game that is amazingly fun for kids and adults. Adults might think they’ll crush this game, but it’s a chore to get a decent number. The colors of the blocks will change, dependent on the number that merges.

You heard it from us first that this will be the game of the year. If you’d like to download the game, your options are below.